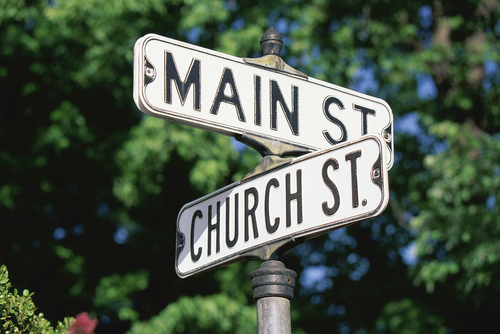 Originally part of Kittery, Berwick was settled in 1631 and was known then as Kittery Commons or Kittery North Parish. Lumbering was an early industry for the town, and the first wood products exported from the colonies in 1634 was from the mill on the Great Works River. The settlement’s name later changed to Unity for the ship transporting Scottish prisoners of war to the American colonies after the Battle of Dunbar. These men were indentured servants, forced to work at the sawmill on the Great Works sawmill. During the Raid on Salmon Falls in 1690, Unity was razed and abandoned by its inhabitants. Resettlement occurred in 1703, and the new community was called Newichawannock, the Abenaki name meaning “river with many falls.” The name changed for the final time when the town was incorporated in 1713, calling the settlement Berwick, after Berwick-upon-Tweed in England. The first schoolhouse in Maine was built here in 1719. In 1814, South Berwick Separated from Berwick, followed by North Berwick in 1831.

Berwick is still connected to North Berwick by a school system, which was awarded a National Bronze medal by US News. On the border with tax-free New Hampshire, Berwick is located near several transportation hubs that make commuting North or South easy either by highway or the Amtrak Downeaster. Berwick is near several major hospitals, as well as accessible to University of New Hampshire and the University of New England.

Mayo’s Family Restaurant is everyone’s favorite place for breakfast, and has the atmosphere of small town written all over it. Everything is home-made, with fresh bakery items available for sale.