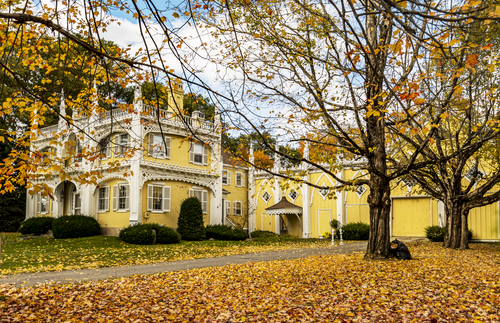 Kennebunk, the Abenaki word for “the long cut bank” referencing the Kennebunk River, was originally settled in 1621, and was part of Wells until 1820. Nestled between the Mousam and Kennebunk Rivers, Kennebunk became a hub for West Indies Trade and shipbuilding. In the first half of the 19th century more than 1,000 ships of all sizes were built in the approximately fifty shipyards in the area. A sign of the period’s wealth is the historic district where one will find many examples of Greek Revival, Victorian, Colonial, and Federal style homes such as the Wedding Cake House, an example of early architecture with extensive scroll-saw Gothic trim. Many of these homes can be seen with guided walking tours, one of which is provided by the Brick Store Museum. Displays include decorative and fine arts as well as artifacts of the region’s history. Other art galleries are scattered throughout town with something for every taste whether it’s sculpture, photography, or painting.

The three beaches of Kennebunk – Mother’s, Parson’s, and Gooch’s beaches – are a must see when in town. Surfing and kayaking are popular here, as well as whale watching. But Kennebunk is more than a tourist destination. School Digger has rated Kennebunk’s school district and high school among the top 15 in the state, and property values here are well above the state median. With an educated population, the most common occupations for residents are sales and management, and residents can commute to Portland or even Boston easily.

AAA picks for restaurants in the area include the White Barn Inn Restaurant, which has gained elusive five diamond rating. On the site of a former shipyard is Federal Jack’s, and if one is in the mood for a brew pub, the Sebago Brewing company provides American cuisine in an informal atmosphere. Other styles of cuisine include Thai, Irish, and continental, so there’s something for every palate.