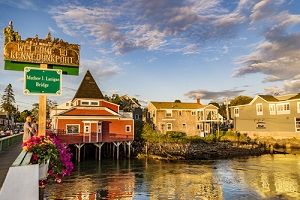 The town of Kennebunkport melds charming coastal village with resort community. Originally incorporated into the Massachusetts Bay Colony in 1663 as cape Porpus, the settlement was abandoned by 1689 due to repeated conflicts with the local tribes. Europeans returned in the early 18th century and the town center – located in what is now Cape Porpoise – was relocated to Burbank Hill and the name changed to Arundel. In 1821 The name was changed finally to Kennebunkport in consideration of the shipbuilding and trade conducted on the Kennebunk River.

By the 1870’s Kennebunkport had become a summer destination for the affluent, and today many antique mansions built by sea captains are now quaint inns. From Dock Square, the current town center, along Ocean Avenue the Cape Arundel Summer Colony Historic District exhibits many well-preserved examples of 20th century shingle cottages from Chick’s Creek to Walker’s Point where former president George H.W. Bush has a summer home.

Kennebunkport also has shopping, the Seashore Trolley Museum, art galleries, and both guided walking and trolley tours. With the Kennebunk river on the west and the Atlantic Ocean to the east, activities on the water include whale watching, sport fishing, and kayaking. Of course, one could also spend the day beachcombing, surfing, or just relaxing at one of several sandy beaches.

Trip Advisor has things to say about Kennebunkport’s dining: in 2014, Rococo was named a top ten ice cream parlor. Other highly rated restaurants include Nunan’s Lobster Hut – with the heading “quintessential Maine lobster in the rough” – Alisson’s, Hurricane, and the Arundel Wharf.