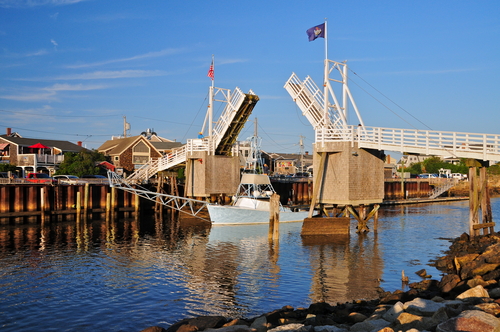 First a village within the town of Wells, Ogunquit separated from Wells and incorporated in 1980. The two communities still share schools, which were rated #5 in Maine and given a National Silver medal by US News.

Ogunquit has retained the name given to it by the original Abenaki inhabitants, a word meaning “beautiful place by the sea,” which it certainly lives up to.

The long stretches of sandy beaches attracted artists starting in the 1800's, and in 1898 the Ogunquit Art Colony was established. Fishermen worked alongside artists in the man-made tidewater basin of Perkins Cove, and the small village began catering to tourists with hotels and inns.

Ogunquit is known for antique shops, jewelry galleries, and candy shops, and has been named America’s Best Coastal Small Town by USA Today. Despite its success as a resort destination, art is still an important part of Ogunquit’s identity and the town boasts many art galleries and the Ogunquit Museum of American Art.

Culture in Ogunquit isn’t limited to art; other stops include the Ogunquit Heritage Museum and the Ogunquit Playhouse. “America’s Foremost Summer Theatre,” the Playhouse opened in its current location in 1937 and the building rivaled contemporary theaters in New York City. The Playhouse puts on new and classic musicals and plays with Broadway talent. The Leavitt Theater in the center of Ogunquit opened its doors in 1924, and is still pulling in summer audiences with live music and classic films on the big screen.

Ogunquit is the outlet for the Rachel Carson Preserve, and the three plus miles of sandy beaches – serviced by trolley – are considered some of the best in the U.S. and can be viewed scenic boat tours. If one doesn’t want to be on the water, the picturesque Marginal Way cliff walk displays Ogunquit’s fine waterfront homes as well as endless ocean vistas.

One cannot come to a seaside resort town in Maine and not try the food. Ogunquit packs more diverse restaurants into a small town than most, from delicious breakfast cafes to upscale sushi bars (and seafood restaurants galore, of course!) The Perkins Cove Lobster Shack began in 1900 in a literal lobsterman’s shack, the Front Porch Piano Bar & Restaurant provides live music and dining, and Angelina’s Ristorante is a vegetarian friendly wine bar and Tuscan grill with the most authentic Italian cuisine north of Boston.

Interested in living in this beautiful place by the sea? Give our office a call at 1.207.351.8188 or search below for homes for sale in Ogunquit -- we'll be happy to introduce you the home of your dreams!