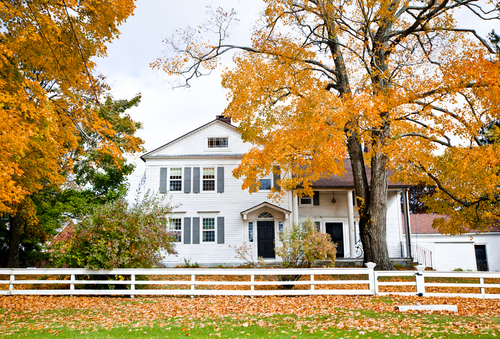 South Berwick was settled as part of Kittery’s North Parish in 1631 and shares a history with Berwick until 1814. The area was known for straight white pines that were highly valued for the British Navy, and a sawmill was in early operation. Abandoned in 1690 after the town was razed, the town was resettled in 1703 and called Newichawannock, the Abenaki word for “river with many falls.”  The town was successful in milling as well as shipping, and the prosperity of the time is evident in the Colonial houses set on broad lawns. An example is the Federal style Sarah Orne Jewett House Museum and Visitor Center, circa 1774. The house overlooks the village center, which is listed on the National Register of Historic Places. Another example is the Jonathan Hamilton House, a Georgian mansion built in 1785, which sits on a bluff overlooking the Salmon falls river. Owned by Historic New England, the house is a museum and is open for tours in the summer.

South Berwick is growing, and the population has increased 8% since 2000 and home values in that time have more than doubled. Crime remains significantly lower than the national average, however, and unemployment is low. Bordered by New Hampshire and Eliot, South Berwick provides an easy commute for work and is only a short distance from the coast and Maine’s beautiful beaches. School in South Berwick is shared with Eliot, and the Marshwood High School is ranked eighth in Maine and received a National Silver Medal from US News. Since 1791 South Berwick has also been home to Berwick Academy, a private prep school.

On the last Saturday in June South Berwick hosts the Strawberry festival, which includes shops, food, games, and trolley rides. In September the town hosts the Pumpkinman Triathalon Festival with a harvest feast on the last day. Ask a local where to go for dinner, and you will be told Fogarty’s. This family-run restaurant has been an icon for over fifty years.