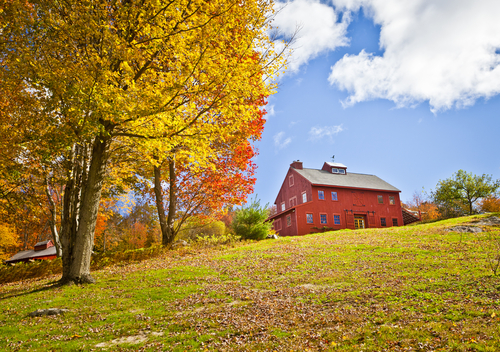 The history of North Berwick is tied in with that of Berwick, since the two towns were part of one community until North Berwick split off in 1831. Named after Berwick-upon-Tweed in England, the town grew up around production and manufacturing. In 1842 the arrival of several railroads turned the town into a major hub, and provided distribution for the goods manufactured there. The two biggest businesses at the time made wool and farm implements, but the railroad cars were also loaded with blocks of ice cut from frozen ponds, granite from nearby quarries, and a variety of wooden products. In 1862, the North Berwick Company on the Great Works River made blankets for Civil War soldiers with forty looms manufacturing over 1,500 yards of flannel per day. The company closed in 1955, but the building was used in the 1995 movie Jumanji and has since been turned into housing.

Manufacturing is still part of North Berwick’s identity, and there are two major producers in town. The first is Pratt and Whitney, an aerospace facility that repairs and manufactures engine components for military and commercial aircraft. The plant has been the largest manufacturing facility under one roof in Maine since 1979. Second, Hussey Seating manufactures seats for spectator facilities, and evolved from the Hussey Manufacturing company, which started as the Hussey Plow Company in 1835. In 2003 Hussey Seating was honored as Maine’s oldest family-owned business.

On the other side of the tracks from Pratt and Whitney and Hussey is Town Pizza, a very casual take-out or dine-in restaurant with American cuisine. Across the street from Hurd Manor, now Angel of the Berwicks B&B, is Red Leaves Chinese food, and down the street is Johnson’s Seafood and Steak.